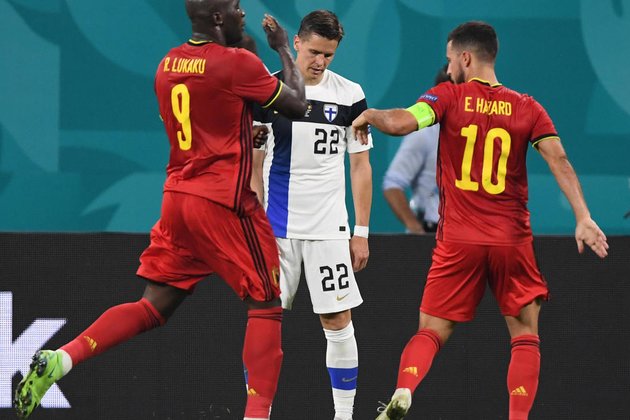 Belgium and Denmark qualify for the knockout phase of Euro 2020

Belgium continued their perfect start to Euro 2020 by beating Finland 2-0 on Monday to finish top of Group B. Denmark claimed an astonishing 4-1 victory over Russia to scramble into the last 16.

For Belgium, the group stage at the European Championship could hardly have gone better.

The world's top-ranked team beat Finland 2-0 on Monday to finish in first place in Group B and join Italy and the Netherlands in qualifying with maximum points.

Finland finished in third place in its first appearance at a major tournament, nipped by Denmark after its 4-1 victory over Russia in Copenhagen.

Finland, which would have finished in second place with a draw, fell behind in the 74th minute when a header from Thomas Vermaelen hit the post, rebounded onto the outstretched hand of Finland goalkeeper Lukas Hradecky and went over the line.

Romelu Lukaku collected Kevin De Bruyne's pass to score the other in the 81st for his third goal at Euro 2020.

Belgium will play one of the four third-place finishers in the round of 16 in Sevilla on Sunday.

Denmark through to final 16

Denmark made it through to the last 16 of Euro 2020 on Monday after a convincing 4-1 win over Russia which alongside Belgium's victory against Finland meant they finished second in Group B.

Goals from Mikkel Damsgaard, Yussuf Poulsen, Andreas Christensen and Joakim Maehle gave the Danes their fist win of the tournament on a joyous evening at the Parken Stadium in Copenhagen.

Delirious fans showered each other with beer as Denmark rattled in the goals that allowed them to end the group stage in party mood after the trauma of Christian Eriksen's mid-match collapse in their opening fixture against the Finns.

Denmark will face Wales in the last 16 in Amsterdam on Saturday.

Andreas Christensen and Joakim Maehle scored late goals to give Denmark a 4-1 victory over Russia on Monday and a spot in the round of 16.

Five teams make it through to knockout phase

Five teams advanced to the round of 16 without even playing at the European Championship.

France, England, the Czech Republic, Sweden and Switzerland all are assured of advancing because they have four points and will finish no worse than third in their groups.

Results in the final Group B and C games have left Finland and Ukraine in third place in the respective standings with three points. That means any team with four points is guaranteed to be at least among the four best third-place teams.

Finland and Ukraine have not yet been eliminated. Results in Group D on Tuesday and Group E on Wednesday could leave those third-place finishers with only two points.