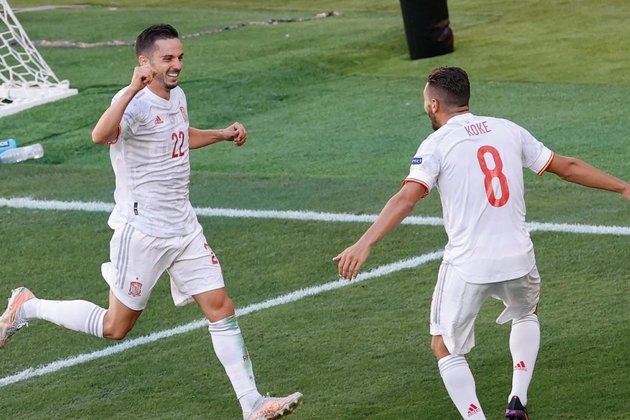 Spain claimed the biggest win of the tournament with a 5-0 thrashing of Slovakia in their final European Championship Group E match on Wednesday to finish second in the group and set up a last-16 clash with Croatia in Copenhagen.

Slovakia were eliminated as four other third-placed teams had either more points or a better goal difference.

Dubravka saved an early penalty from Alvaro Morata but gifted Spain the opener when he attempted to punch a rebound off Sarabia's shot over the bar, only to palm it into his own net.

Aymeric Laporte doubled the lead before halftime. Sarabia was then rewarded with a goal when left back Jordi Alba swung a cross into the box and the Paris Saint-Germain winger found space to take a first-time shot that went in off the post.

Sarabia turned provider when he set up substitute Ferran Torres who scored within a minute of coming on, flicking a low cross past Dubravka for the fifth. Spain forced another own goal minutes later when Kucka failed to clear off the line.

In the other Group E game, Sweden sent Poland home from the European Championship on Wednesday with a stoppage time winner to make it 3-2 in one of the tournament's most exciting games.

Sweden appeared to be cruising after Emil Forsberg scored the second fastest goal in Euros' history a mere 82 seconds in, followed by a second-half breakaway strike.

But Poland's Robert Lewandowski, who hit the bar twice in the first half, narrowed Sweden's lead two minutes later with a curling shot from outside the edge of the penalty area, then got a second in the 84th minute to set up a thrilling finale.

Sweden now top the group and, in the knockout stage, Sweden will face one of the third-placed sides in Glasgow on June 29.