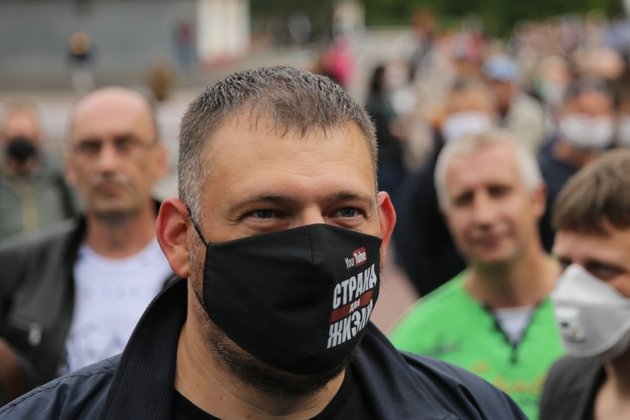 Trial Of Belarusian Vlogger Syarhey Tsikhanouski To Start In Homel

MINSK - The trial of Belarusian video blogger Syarhey Tsikhanouski and several other opposition figures is scheduled to start on June 24 inside a detention center in the southeastern city of Homel.

Tsikhanouski, a leading opposition figure who was arrested after expressing his willingness to challenge Alyaksandr Lukashenka in last year's disputed presidential election, is accused of organizing mass disorder, inciting social hatred, impeding the activities of the Central Election Commission, and organizing activities that disrupt social order.

If found guilty of the charges, which are widely considered to have been trumped-up, he faces up to 15 years in prison.

The other opposition figures also scheduled to go on trial on June 24 include popular blogger and RFE/RL consultant Ihar Losik, as well as Mikalay Statkevich, Uladzimer Tsyhanovich, Artsyom Sakau, and Dzmitry Papou.

SEE ALSO: RFE/RL Calls For Ihar Losik's Release On Day 300 Of His Detention

Relatives of Tsikhanouski and the other defendants told RFE/RL last week that they had been officially informed about the date and location of the trial, which will be held behind closed doors. It is expected to last until the end of July.

Tsikhanouski was the owner of a popular Belarusian YouTube channel called 'The Country for Life' when he announced his willingness to run against Lukashenka after using the channel to challenge and criticize Belarusian authorities.

He was arrested in May 2020 shortly after election officials rejected his candidacy. He has remained in pretrial detention since then.

His wife, Svyatlana Tsikhanouskaya, took over the election campaign and became the main challenger to Lukashenka, who has been the autocratic ruler of the country since 1994. Tsikhanouskaya and her supporters claim the election was rigged, insisting that she won the vote.

The official results sparked months of mass protests and a violent crackdown on the opposition and demonstrators that has seen thousands of people detained, including journalists working to cover the developments.

Many have been injured and there are widespread allegations of systemic torture within Belarusian detention centers. More than 1,800 criminal cases have been filed against demonstrators.

SEE ALSO: Belarusians Protest Across Europe In 'Day Of Solidarity' Against Lukashenka

Tsikhanouskaya and other leading opposition figures have been forced from the country. She currently lives in Lithuania with her children.

Losik, who is among hundreds of political prisoners caught up in the crackdown, has been in pretrial detention since June 2020. He was initially charged with allegedly using his popular Telegram channel to 'prepare to disrupt public order' ahead of the August election.

In April, he tried to slit his wrists and launched a four-day hunger strike after being informed of new, unspecified charges. He had previously launched a six-week hunger strike to protest the original charges.

RFE/RL President Jamie Fly on June 15 reiterated his call for authorities to immediately release Losik and cease their 'systematic targeting of journalists.'

'On June 25, a year will have passed since Ihar Losik was unjustly seized in his own home by Belarusian authorities,' Fly said. 'Since then, Ihar has endured mistreatment and psychological torture while in pretrial detention, which is about to be compounded by what can only be termed a show trial."